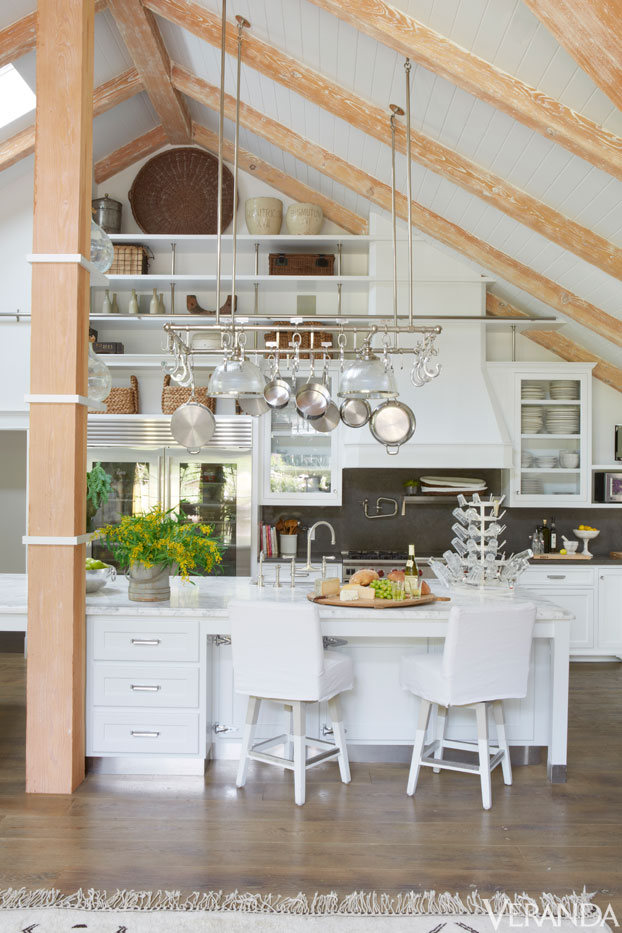 When you love to cook, your dream room isn't a living room. It's not a bedroom. It's not a bathroom with a soaking tub and jets so good you never want to leave. It's a state of the art, beautiful, chef's kitchen. The kind of kitchen where the sunlight hits your fresh fruit in just the right spot, ripening it to perfection. The kind of kitchen where open shelving meets tucked away storage, where there's a place for everything, and everything is in its place. In short, a kitchen quite similar to this one, discovered in this feature of a mid century LA home reimagined by Windsor Smith. This home, which is designed around a color palate of neutrals, pale blues, lavenders, grays and whites, is a little piece of heaven in Los Angeles. The architecture of the space is such that the home wraps around a series of gardens, with great rooms flanking the house on either end. Since it's a mid century Californian home, texture is abound – not the least of which can be seen in the home's beautiful wood ceiling beams. Turns out, when Smith first began her project, the beams had been faux-finished (gasp! big design no-no in our book), then faux distressed with gouges, then painted over in white.

Horrible, right? Luckily, Smith had a plan. "We wanted to make them look organic," Smith explains, "so we sandblasted them down to the natural wood, leaving just the faintest residue of white paint." These raw beams, now with just a hint of white patina, were the inspiration for everything that followed in the space, and the cool, calming color palate mentioned above. The kitchen pictured above is merely a part of one of the home's great rooms – it also includes the dining area and den – so Smith added a whitewashed brick wall to give the space a loft-like feel. Meanwhile, a wood dining table features mismatched chairs from various areas and countries, which adds to the beachy but classic feeling of the space.

Given the kitchen's incredible ceiling heights, Smith had a lot of space to play with. Smartly, she chose to maximize the storage, building in tall shelves accessible by a sliding library ladder (how very Beauty and the Beast!). White linen upholstered stools sit at a large island, playing nicely with the Irish gray stone of the backsplash and countertop. Meanwhile, a gorgeous glass door Viking refrigerator makes food storage stylish, while the perfect combination of open and closed storage adds to the loft-like feel of the space.

Seriously, what's not to love?