If you love interior design and you live in New York City, there’s one annual event you won’t want to miss: the Kips Bay Decorator Show House. Each year, the nation’s most talented interior designers vie for a chance to participate, and the imaginative results often set the design trends for the year to come. Needless to say, it’s one of our favorite events to cover here on the Kuotes. The location of the show house changes each year, and this year, the show is held inside a 19th-century brick Georgian, designed by architect Charles Platt, resting graciously at 125 East 65th Street. Until recently, the building served as the headquarters for the China Institute of America, and it’s now on the market for $26.8 million. The prestigious honor of designing the five floors of the home was distributed to 18 exceptional designers, one designer per space. Here are our favorite rooms and highlights from the show house and the celebrated designers behind these looks: 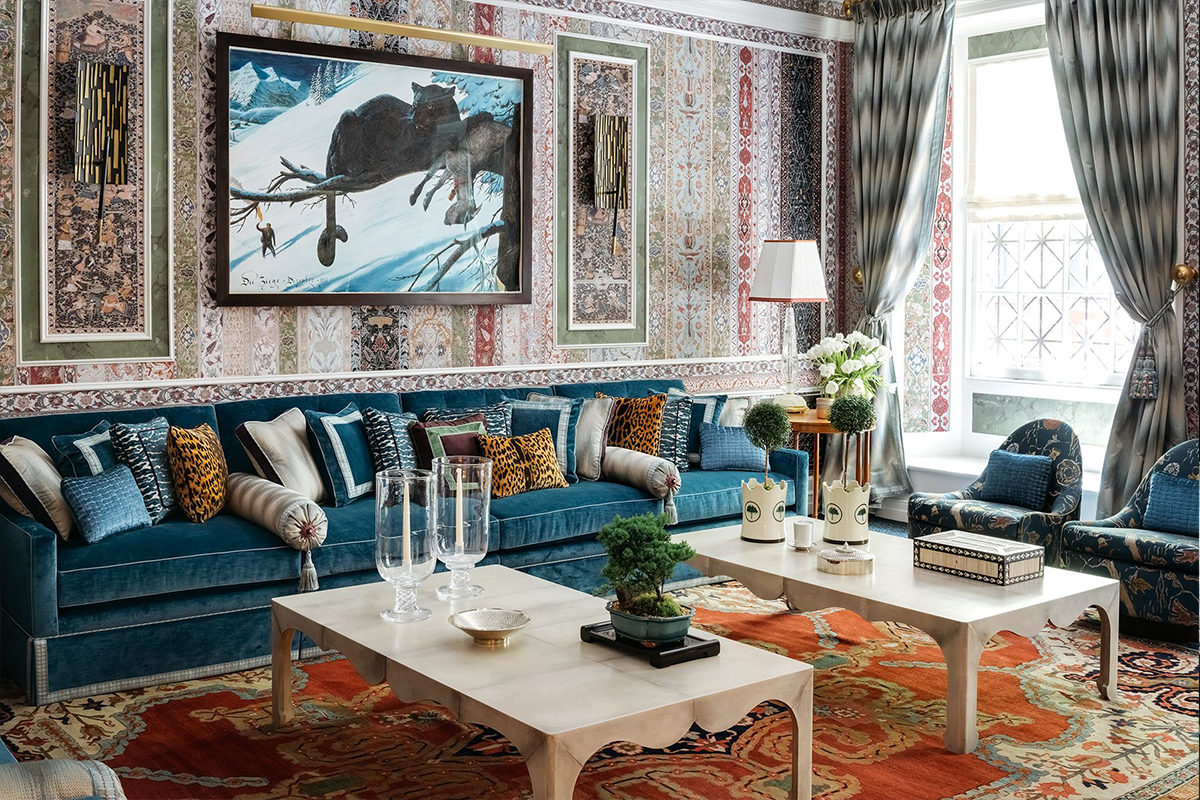 The biggest trend we noticed at Kips Bay this year manifested upon entry. And let’s just say, it was anything but subtle. Richard Mishaan’s maximalist kaleidoscope of global-inspired prints and lush textiles stopped us in our tracks the moment we stepped inside. The room is a magnificent example of pattern play and expertly mingles pieces from several different time periods. The custom wall coverings were brought from a 15th-century house in the Middle East, the vintage rug is an 1889 Serapi, and the daunting feral panther is a contemporary Audubon painted by Walton Ford. Fun fact: the painting is actually based on a true event when a black panther escaped from a zoo in Zurich in 1933. 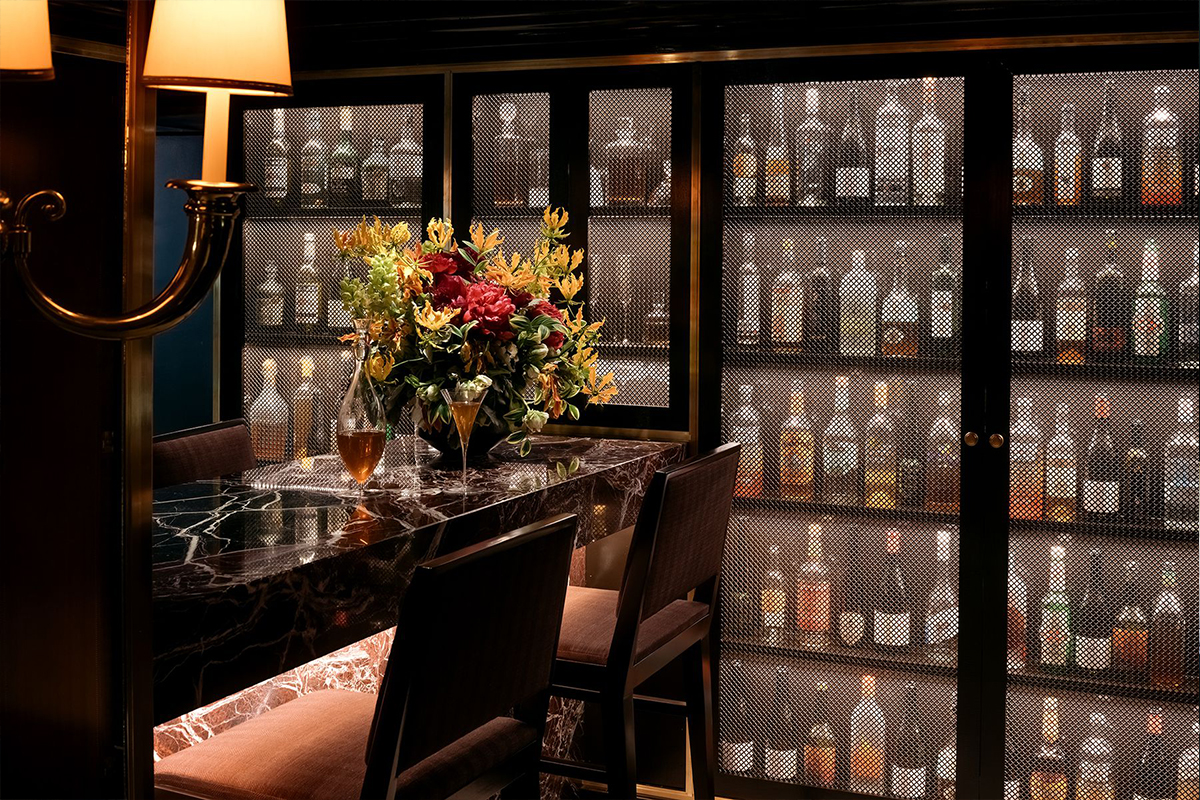 Walking downstairs to the basement level of the Kips Bay show house felt like walking into a different era—a swanky, film noir bar and lounge designed by Lichten Craig Architecture and Interiors. We immediately spotted some design challenges. It was an awkward space with no windows, low ceilings, random soffits, and a system of hanging sprinkler pipes akin to the NYC subway map. But with the design genius of Lichten Craig, the space was transformed into a sumptuous and chic midcentury salon. Our favorite part of the space was in the details. Bottles of liquor rested almost like ghosts on dimly lit shelves with grated doors, the trims were finished in brass plating, and the stunning marble bar was mirrored in a gorgeous mural by Anne Harris on the opposing side of the room (see below). 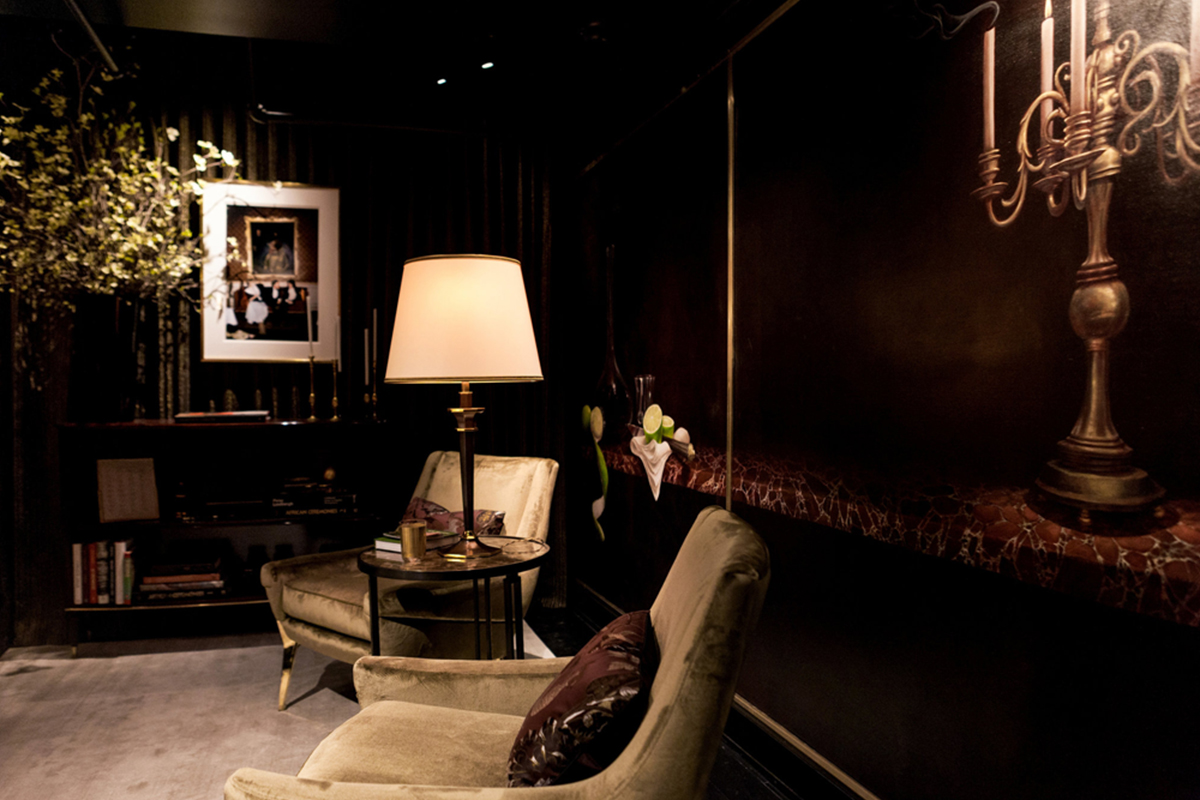 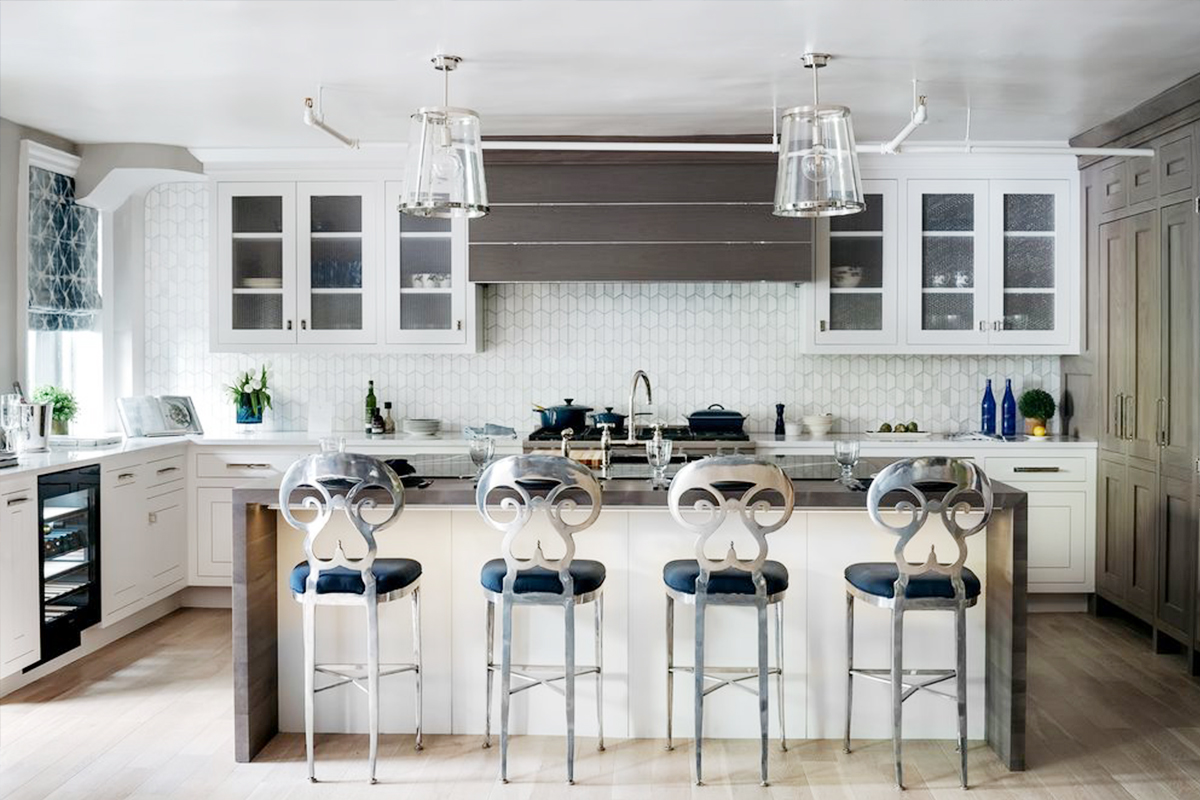 At the Kips Bay show house, everyone is always waiting to see the kitchen. This year the kitchen was located on the garden level and sits in an open concept space adjacent to a sitting room (see below). While the look is white, bright, clean, and simple—don’t let it fool you. The attention to detail Bakes & Kropp incorporated into this space will definitely have you feeling some #kitchenenvy. The backsplash is not ceramic tile but actually individually cut pieces of metal in an uninterrupted pattern… So where are all of the outlets for kitchen appliances? Hidden on the underside of the cabinetry! There are also outlets on the inside of the drawers, so you can easily stick a phone or iPad inside to charge while prepping a meal! 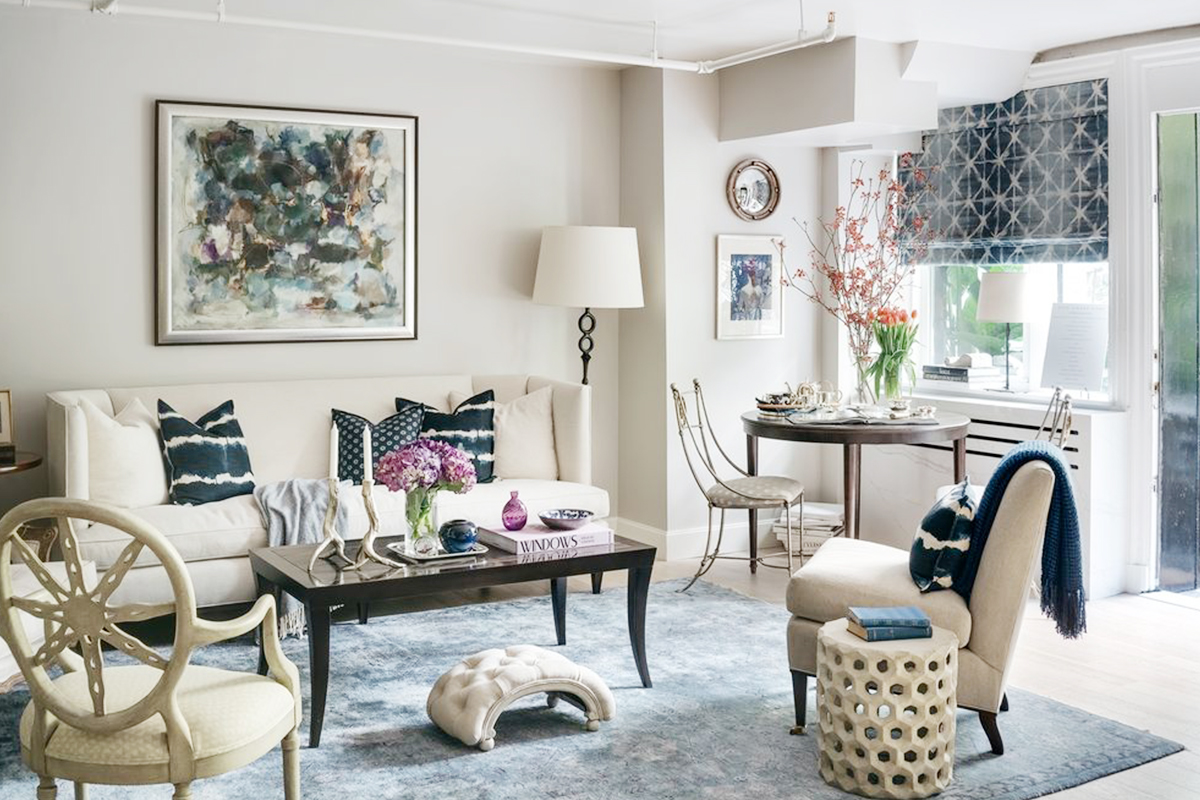 Opposing the kitchen is the garden sitting room designed by Kate Singer Home. If you know KKH, you know we love a blue and white palette, so we immediately were head over heals with the bold indigo hues and natural tone linens. Even though this space was put together by a different designer, the space sits impeccably beside Bakes & Kropp’s kitchen, and it also has a beautiful view unto the garden outside (see below!).

We are always excited to see the outdoor spaces at Kips Bay, and we were not disappointed by the landscape architecture magic Janice Parker cast onto the garden this year. If you were paying attention earlier in the article, you’ll remember that this year’s show house used to be the headquarters for the Chinese Institute of America. This outdoor space was originally a traditional Chinese garden with a pebble mosaic paving. While Parker wanted to honor the garden’s history, she brought a contemporary sensibility to the space by adding both Hollywood and tropical influences. Besides the brilliant red birdcages and bamboo thickets, the most notable detail is the striking moon gate Parker commissioned, which is fabricated with individual pussy willow branches that were inserted one by one! We had the honor of meeting Janice Parker, and we can’t wait to read her latest book, Designing a Vision. 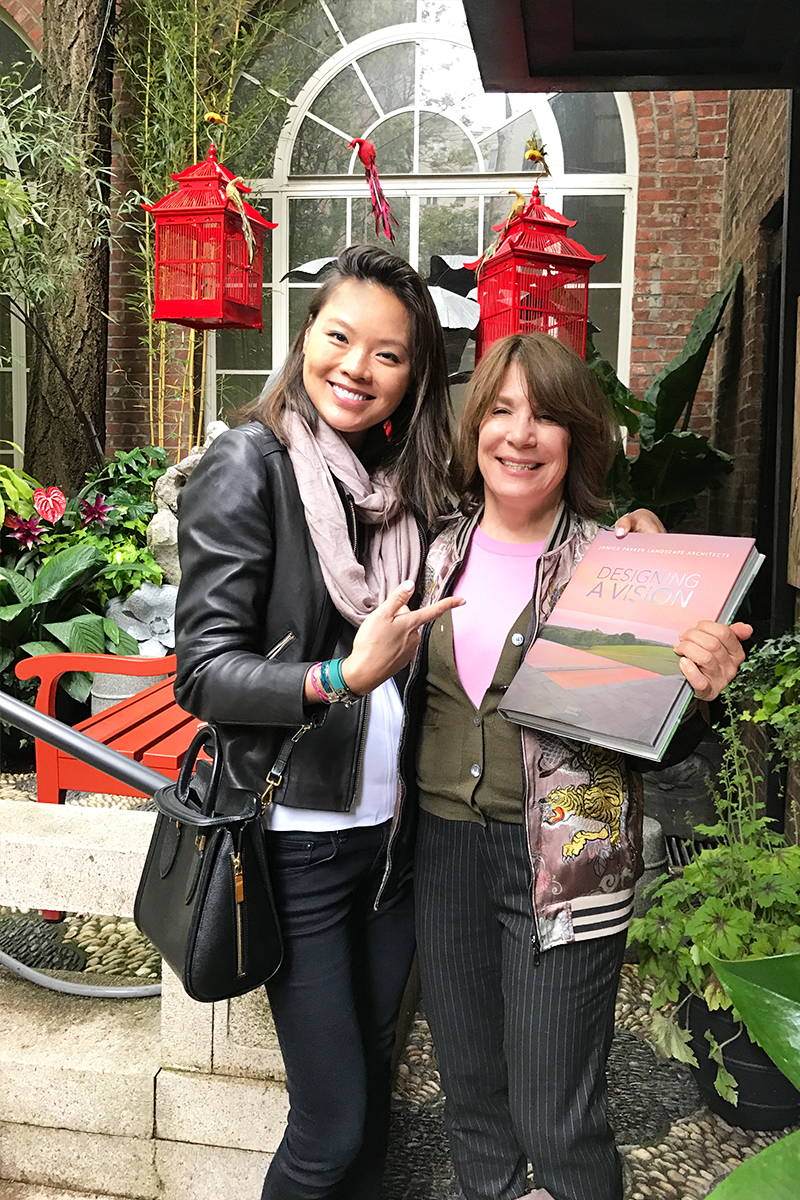 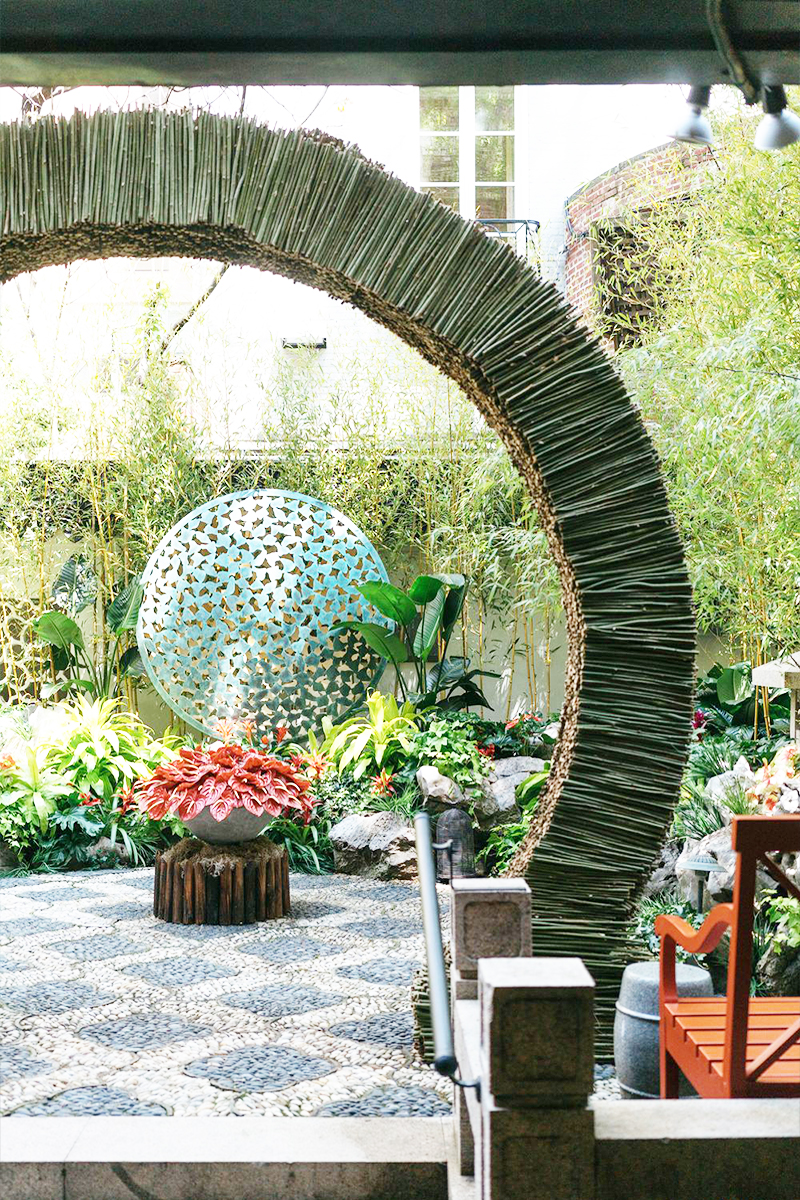 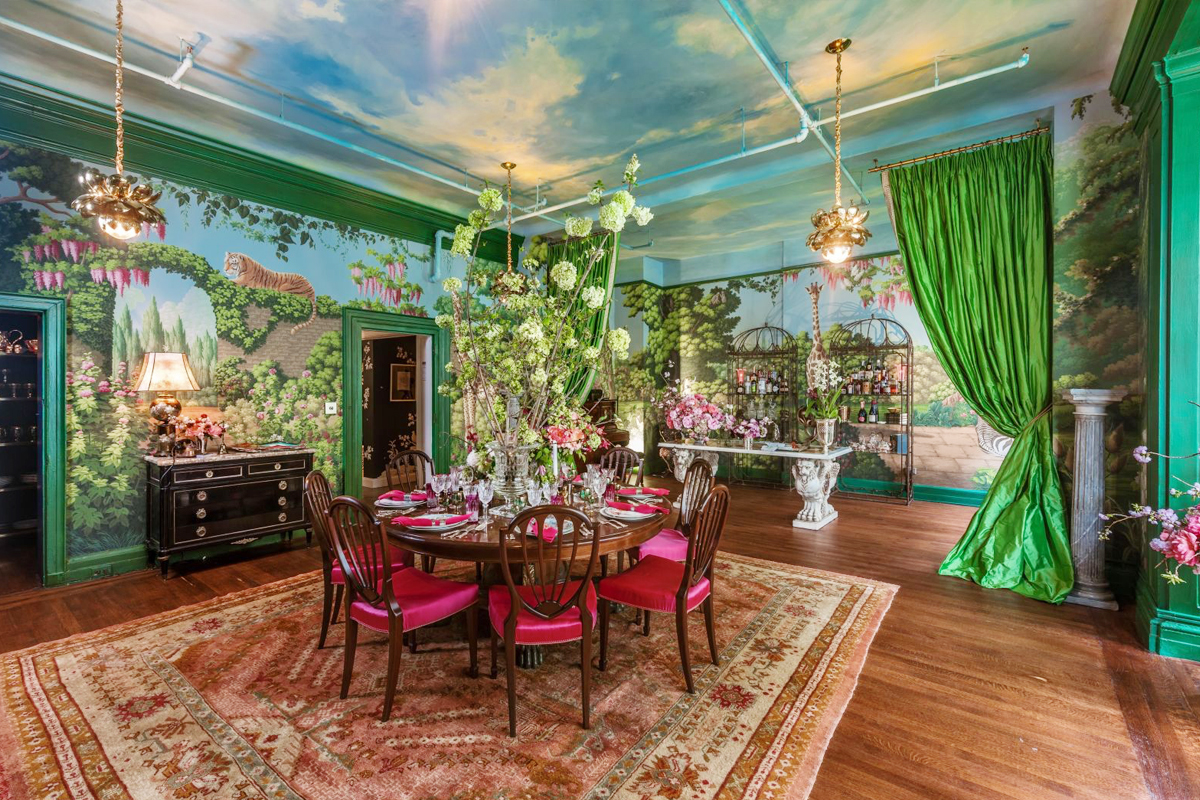 While we don’t like to play favorites here at the Kuotes, we can, at the least, say with confidence that we had no doubt Ken Fulk was behind this dreamland dining room. And we’re pretty sure our jaws are still there on the ground from when they dropped off! The room, titled Madame’s Magical Menagerie (of course), was inspired by the factitious story of an eccentric Upper East Side socialite who keeps a secret menagerie in her backyard in order to throw the most grandiose dinner parties (of course). The ravishing centerpiece is from Fulk’s own Flower Factory, the dinnerware is all Hermès, and the wallpaper is gorgeous, hand painted de Gournay! 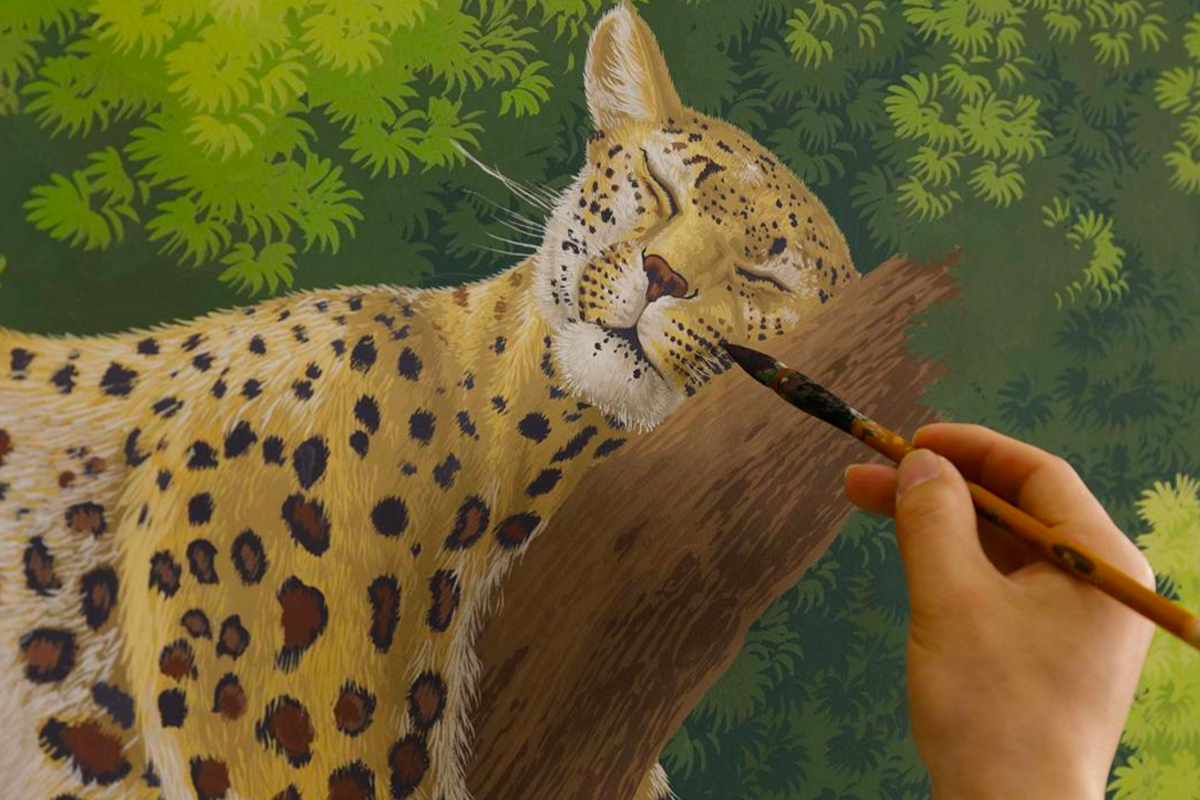 Check out the flamingo neck painted directly onto the pipes!

And all of the florals are (of course) real. 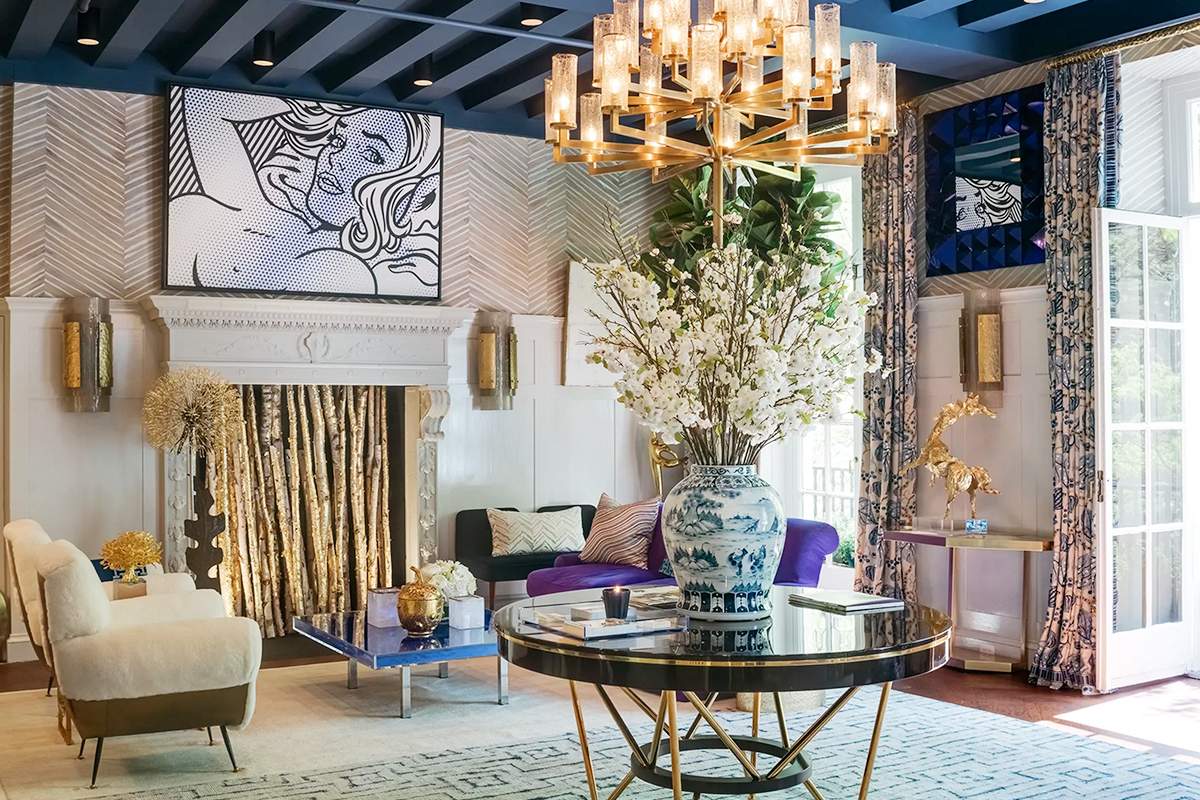 Kirsten Fitzgibbons and Kelli Ford kept with the eclectic, maximalist, pattern-mixing theme we saw throughout the show house this year. Of course, they brought their standout contemporary-glam point of view! If you like glitz and glamour (and who doesn’t?), this decadent living room is heaven. Every surface was reflective, everything that could be gilded was (down to the birch logs in the fireplace!), and if that somehow isn’t enough for you—there’s a literal painting of a diamond in the room as an acting mirror. With so much going on in the space, you might worry that it’d feel overwhelming, but cool cyan blue ceiling beams offer cohesion and bring together all of the happy and unabashed details. 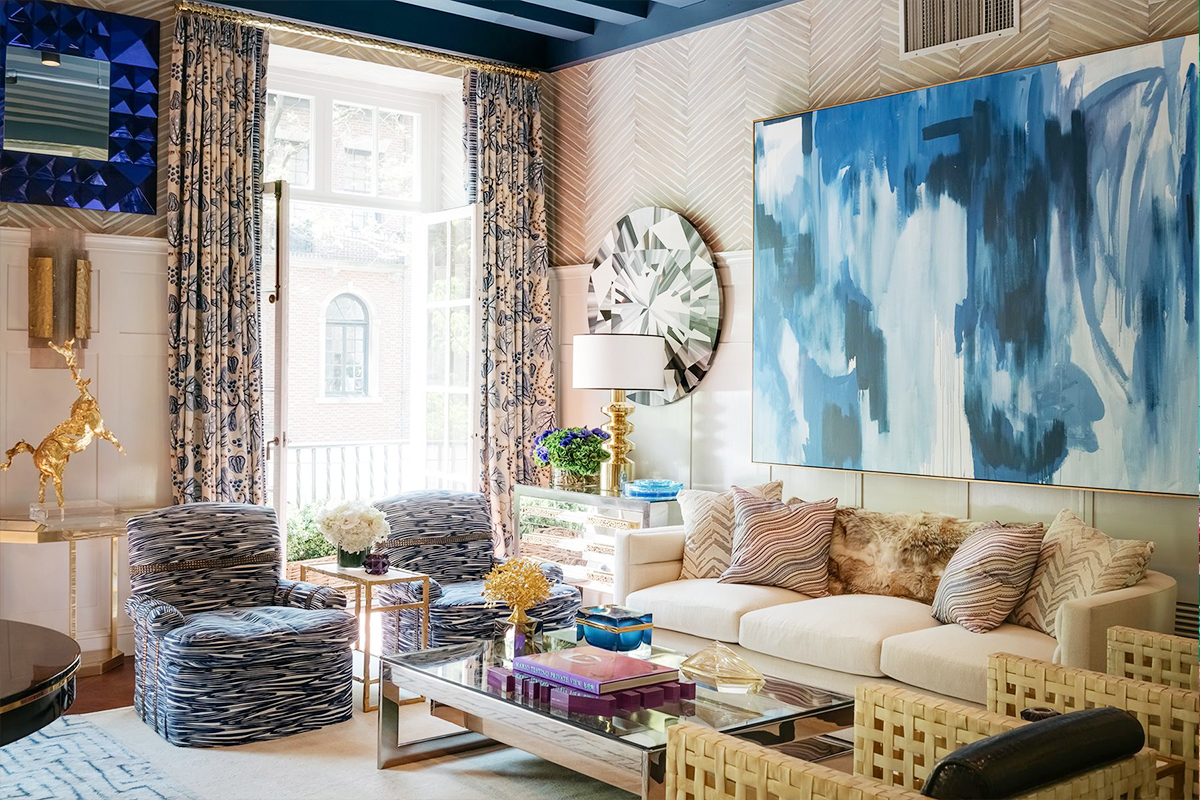 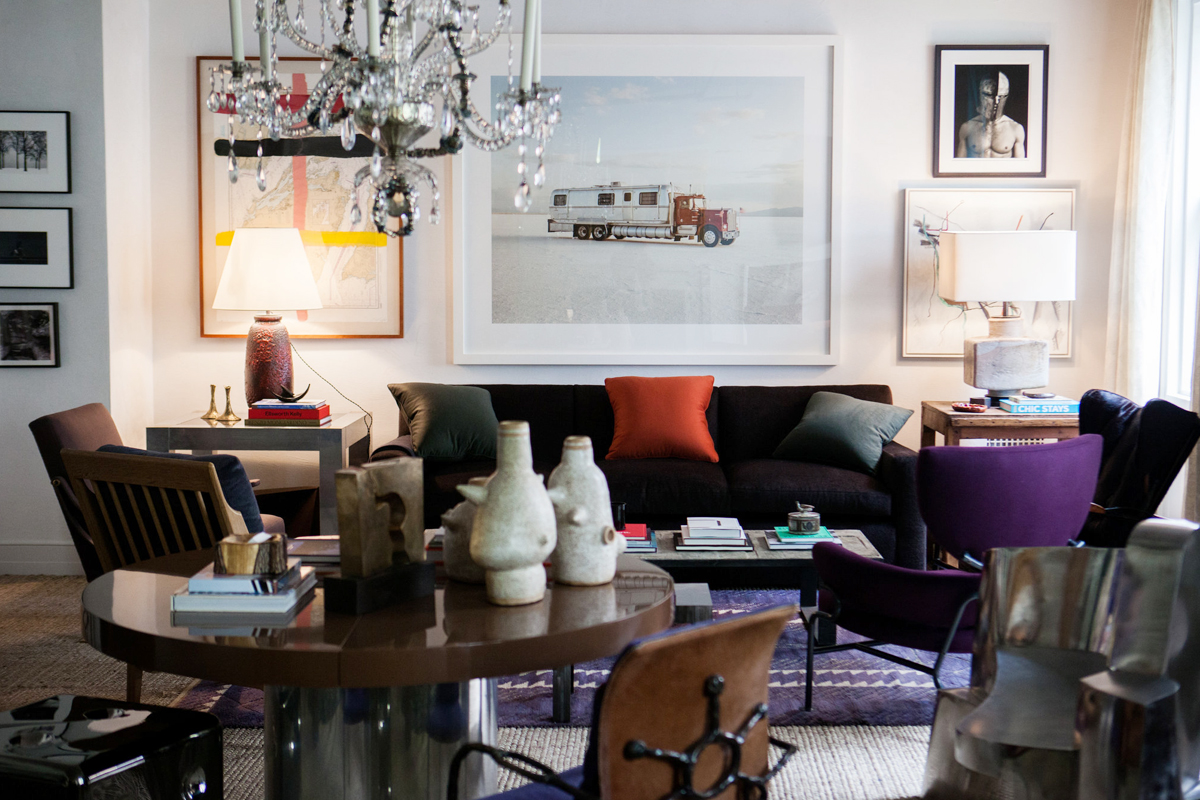 In contrast to Kirsten and Kelli’s living room, Robert Stilin’s sitting room, while still eclectic, has a taste for midcentury and contemporary Italian furniture. Although it’s much more subdued than the rest of the show house, it impressed with its vast collection of art, from a photograph of a truck called “World’s Fastest Mobile Home,” by Richard Misrach to an abstract by Dan Colen. Each of the midcentury pieces Stilin selected were also works of art in and of themselves, our favorites being the pair of 1940s armchairs by Franco Albini upholstered in green cashmere. Stilin was also the only designer to take a stance on the current political climate in a cafe board piece by Maynard Monrow; it reads, “For Your Information We the People Are Immigrants.” 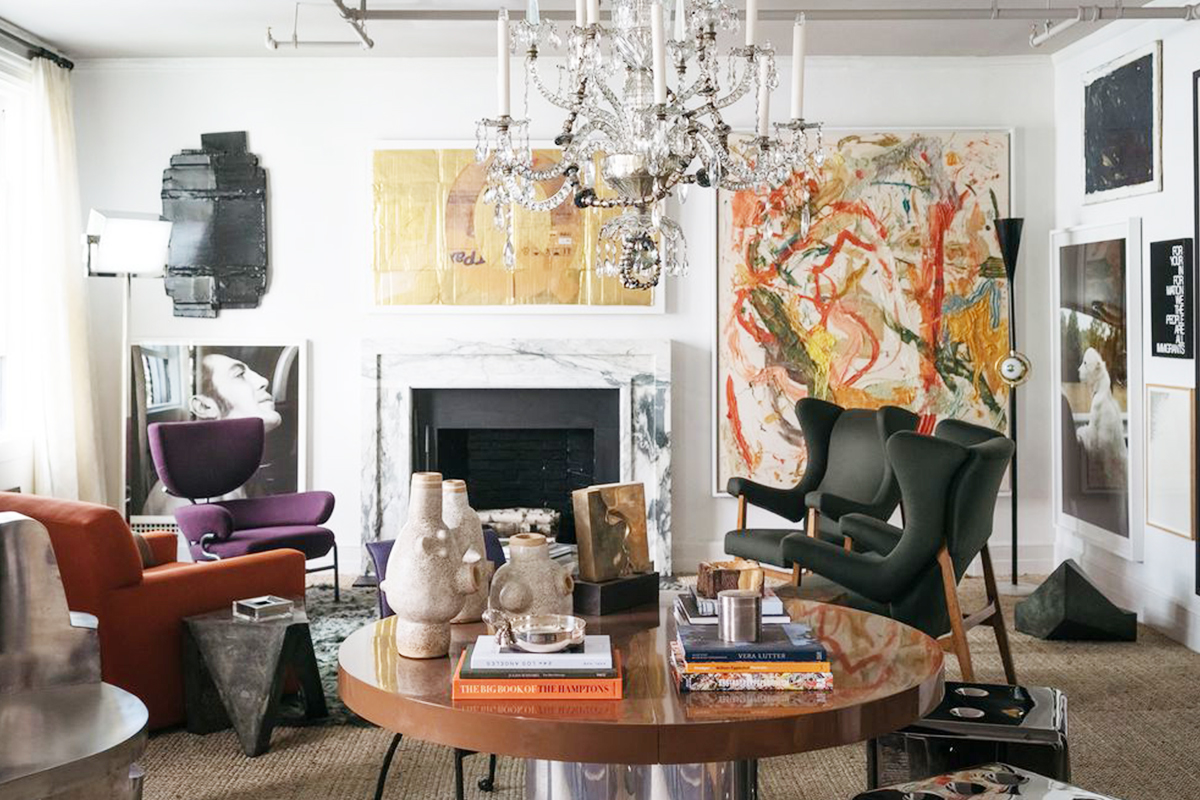 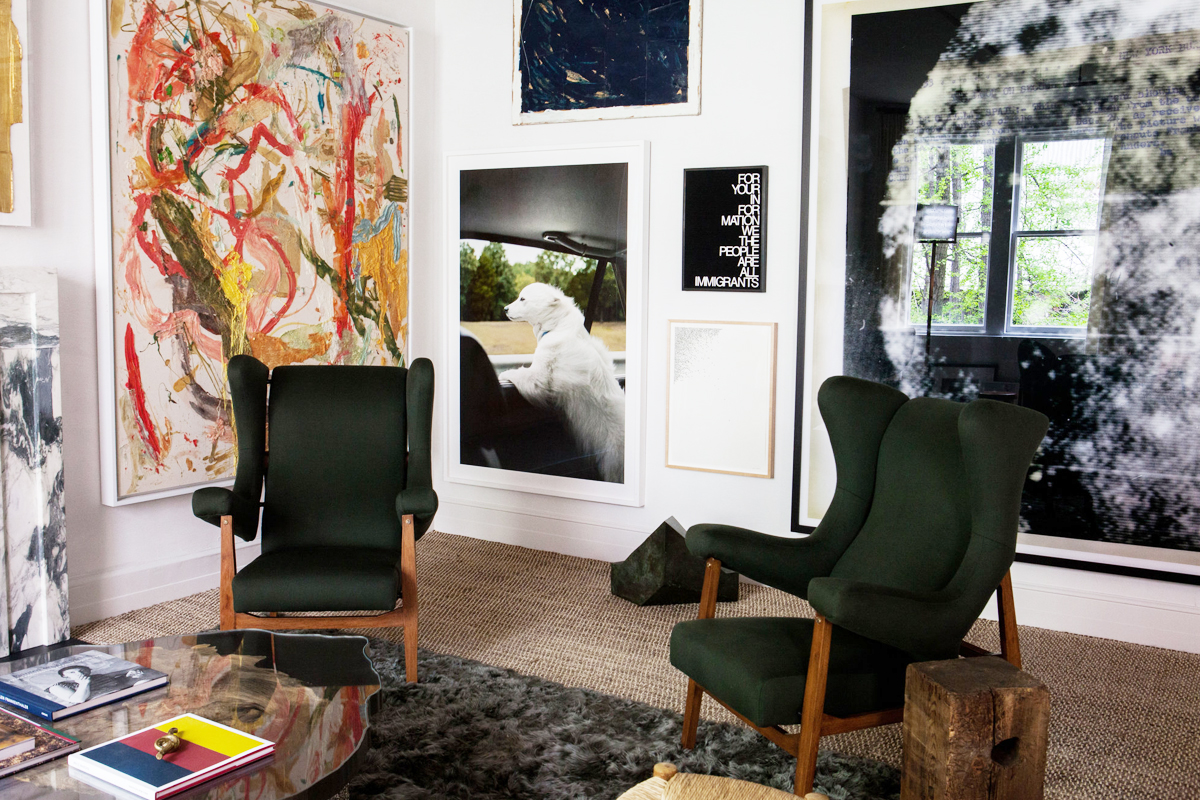 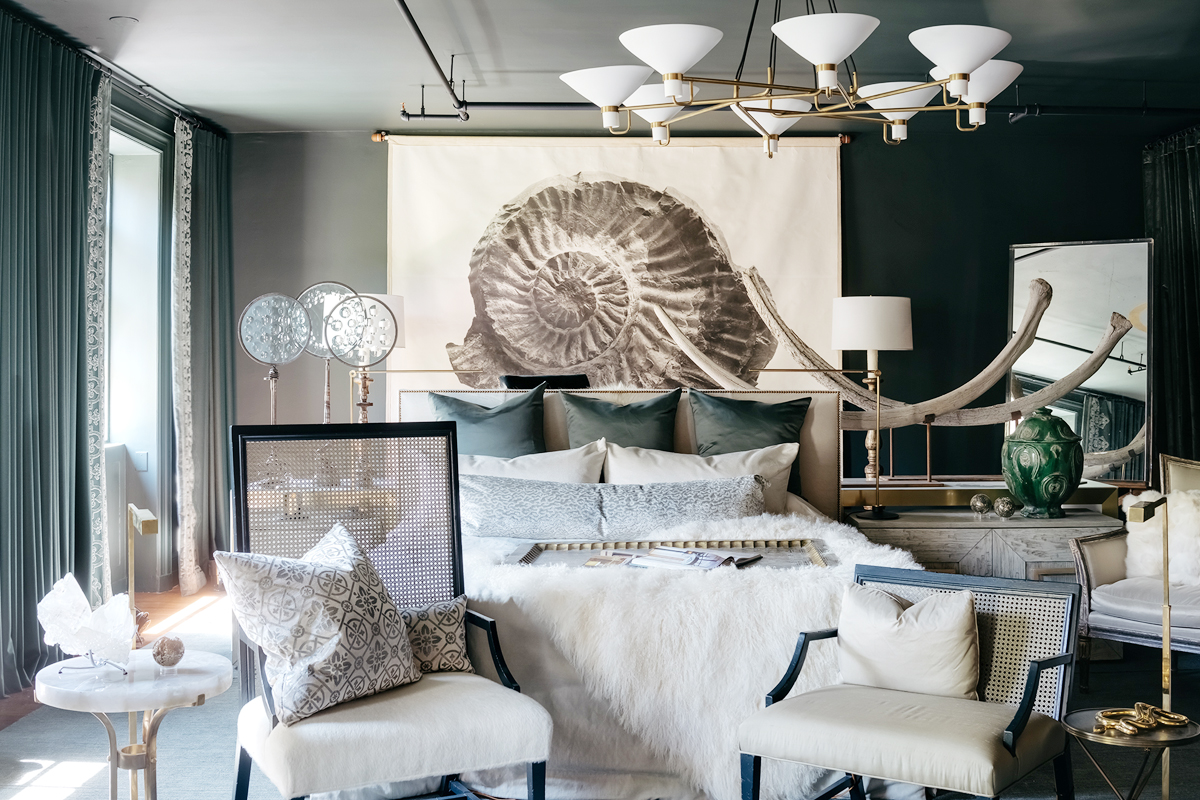 Our last Kips Bay highlight is designed by Susan Ferrier of McAlpine. If you follow us on Instagram, you’ll know that we post work from the McAlpine group ALL THE TIME and love everything they do, so it was not a surprise that every one of us were gushing over this moody master bedroom. The springboard for the entire design was a set of lithographs that date to the 1800s, and a McAlpine rep told us the room was meant to seduce “a league of extraordinary male archeologists.” We may not be archeologists at KKH, but we were swooning over every detail: the plush bed-sitters, the green velvet drapes, chic LED bedside lamps, and a large-format drawing of an Ammonite that informs the rest of the nature-inspired decor.

All proceeds from the Kips Bay Decorator Show House goes to the Boys and Girls Club of America. The show house is open until June 1, and you can get tickets and all of the details online here. If you live in the area, we encourage you to visit! Make sure to comment on your favorite room below.

2 thoughts on “A Look Inside: 2017 Kips Bay Decorator Show House”